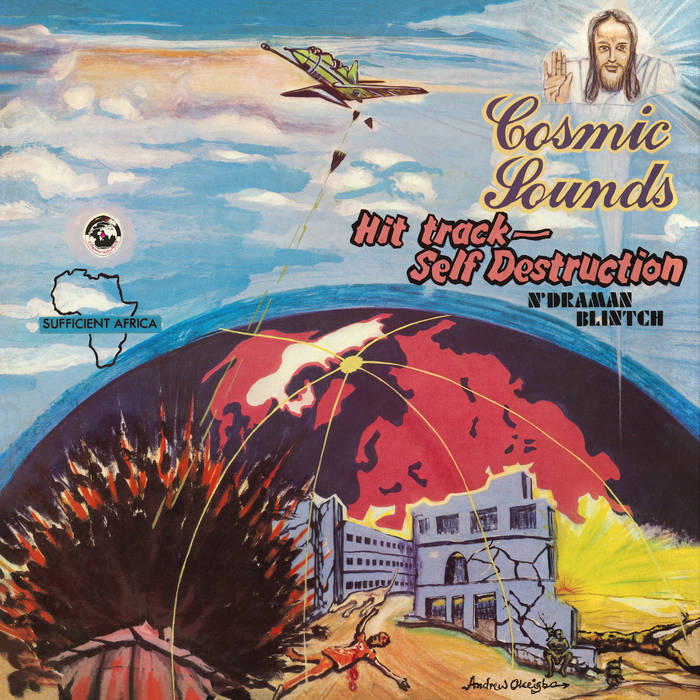 Andrew Jervis WOW. From the art, to the cosmic tunes, to the album info, just wow. Favorite track: Essika-Ti.

The Funkadelic Freak of Fundamental Flavors

----------
REVIEWS
"Absolute killer reissue" - Gilles Peterson
"Could N’Draman be the next William Onyeabor-esque discovery?" - Mr Bongo
"One of the holy grails of Nigerian disco" - MCDE
"Hands down a deserved "all killer, no filler" classification" - Rush Hour
"Nigerian disco grail, If you’re into this genre, this is the ultimate bomb" - Superfly Records
"This record is meant to make you dance well into the apocalypse" - Bandcamp Daily
"Sounds like the soundtrack to the funkiest space-aged african disco party" - Music Is My Sanctuary
"Bonkers Afro disco holy grail" - Phonica
----------

Tired of reading the words ‘classic’, ‘masterpiece’, ‘missing link’, ‘cult’, ‘seminal’ in every press release? Just trust us on this one: this is the real deal. We have no choice but to use those words and urge you to (re)discover one of the ultimate Afro Disco lost classics. If you’ve never heard it, thank god. If you’re one of the very few connoisseurs who have, get to experience it in a carefully remastered version.

How could such a masterpiece stay in obscurity for so long?

Well, no one knows where N’draman is. He’s presumed dead, and so is Mr Patrick, the label owner, an ex football player who turned his focus into fashion after suffering a career ending injury. Selling jeans from an outlet in Monrovia (Liberia), he only ventured in the music business for a short period of time, releasing a handful of incredible albums on his Cosmic Sounds imprint.

The word on the street was that Nigerian legend William Onyeabor was somehow involved with the production of the album, or maybe playing synths on it. Both those rumours were inaccurate, although N’draman Blintch’s previous and first record “Cikamele”, was indeed recorded at Willfilms, Onyeabor’s studio in Enugu, Nigeria. And some of the musicians playing here were also key members in his pool of session musicians.

“Cosmic Sounds” is many things: Psychedelic, politically engaged, funky to death, full of synths, with an artwork to die for, a perfect crossover of African and Western culture. Music for the body and soul. Cosmic disco before the genre even existed. Actually the genre was born the year this record was released. Did Dj Danielle Baldelli hear it? Was it ever played by Larry Levan or Mancuso? In a pre internet era, its unlikely but not impossible. Nowadays most DJs know what’s up now that Africa is on the map. Go and check the discogs page: 550 wants, countless messages of people ready to pay any amount for a copy. The last one sold for 1300 euros, and it was the first to show up for sale in the last 5 years.

We are extremely honored in carrying the reissue of this gem and have treated the task with utmost respect: both artwork and audio were restored by specialists, and liner notes were written by Temitope Kogbe, an Afro Funk expert who runs the label OdionLivingston, founded with legendary EMI Nigeria producer Odion Iruoje.

38 years after its original release, the world is finally ready to hear ‘Cosmic Sounds’ in all its glory.

Damu The Fudgemunk shares his recent collab with Def Pressé, plus jams from Common and more